Home » This and That » Another Pretty Darn Good Day!

Today (Saturday) was a busy day.  Ellen and I went to Best Buy, where she found a desktop she liked.  Her old one used Vista and most programs don’t support that.  I checked out the prices and sizes of TV’s.  I don’t have a big house so having a 40-60 inch wide screen would be pointless.

Then we went to Partners in Care.  This place resells clothes, shoes, household items.  She found a wheeled walker that will fit in the car.  I didn’t see anything that said “Buy me”.

Then lunch at Bob Evans.  Then off in a flea market where Ellen bought some old cross stitch patterns.  Again, nothing for me.

Last but not least we stopped in to Bay Area Computers.  They were nice.  I have one desktop computer system, and many laptops.  Turned in the oldest laptop from when I was in Sicily in the early 1990’s.  They destroy the hard drive – and if you want, you can watch them do it.  So, I will be taking more over to them – keyboards, mouse, printers, scanners, and etc.  They only thing they don’t take in monitors – they go to the dump.

So now I’m listening to the baseball game – Oakland Athletics and San Francisco Giants. And stitching.  Still in preseason games.  But in less then two weeks – BASEBALL.

The weather is still a bit windy and chilly.

I want to learn everything I can about the old fashion needle arts that all girls learned while they were growing up in the 1700's to present. 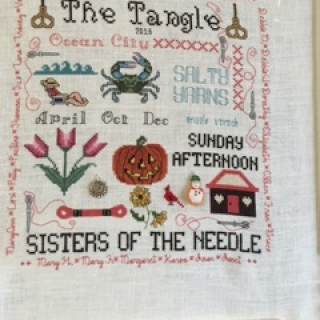 I am a Navy veteran living in Maryland. I am learning about the needle arts that were taught in the past.

Sharing my love of cross stitch and papercrafting

Lord Libidan
Home Sewn By Us

Blog about quilting, sewing, cross stitch and other handcrafts

A place to share with others - my love of needlework and Crazy Quilting which my daughter introduced me into some time ago.

A slight obsession with books

What I do in my spare time

a website and blog for members and potential members

A place to share my needlepoint and connect with other stitchers.

My adventures in Quilting and Gardening

The latest news on WordPress.com and the WordPress community.